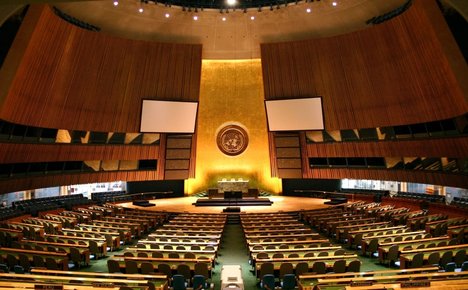 ​Poverty: The War on Humanity
​By Pojanee Fleury

There is a war going on, one that reaches deep into the bellies of men. A war that, despite being fought on multiple levels claims the lives of thousands each year and has others living day in and day out in absolute misery. American PBS talk show host Tavis Smiley has declared that poverty is “the new slavery (1).” Poverty is the leading cause of violence, suffering, sickness and death all around the world. At the recent General Debate of the 67th Session of the Untied Nations General Assembly, leaders of nations ravaged by the effects of poverty, addressed their challenges and presented their plans to eradicate it thus paving the way for true economic growth and stability.

Her Excellency Mrs. Joyce Banda President of the Republic of Malawi spoke candidly about poverty, its affects on the citizens of Malawi, and her plans on how to fix deep-rooted problems that exist in the country. President Banda quoted UN Secretary General Ban Ki-moon in his re-election speech in which he stated that the “biggest threats to security and peace are poverty, lack of opportunity and lack of hope (2).” Poverty is the absence of peace, it is the absence of hope and it is the absence of growth. There are many reasons why poverty exists around the world but its eradication is essential to the survival of the future generations. There has been significant progress made around the world to raise the standard of living for those affected by poverty, however, natural disasters, climate change, and recent challenges in the global economy have setback the progress leaving some regions back at the bottom of the uphill battle of economic stability.

The Prime Minister of St. Vincent and the Grenadines Dr. Ralph Gonsalves, the Prime Minister of Antigua and Barbuda Baldwin Spencer along with President Banda and many other heads of nations that struggle with poverty in their countries, continue to speak out about the challenges faced by their citizens at recent Debates. They have articulated issues that have brought about deepening levels of poverty in recent years. Prime Minister Gonsalves stated that “in [the] Caribbean region, the global economic and financial meltdown continues to be felt most acutely by the poor, the youth, the elderly and the vulnerable, who bear no responsibility for the rampant financial speculation and unregulated movement of capital that spurred the [recent] crisis....[the] region is forced to contemplate the implications of a potential 'lost decade' of development (3).”  This is a deep crisis for a country that has been struggling with poverty since its conception and independence; any set back in development can be fatal. This was seen in the case of the 2010 earthquake in Haiti. It was a setback that will take an estimated 20 years from which to recover, which  means that during that time there would be very little to no growth and an extremely weak, fragile economy. The social effects of poverty dramatically increase in such a climate. PM Gonsalves continued to say that, “small, highly-indebted middle-income developing countries, like those in the Caribbean, which are very vulnerable to natural disasters and international economic convulsions have especial concerns (3).” The vulnerability of developing nations challenges the efforts of economic stability and security. Instability in the global economy, limited access to the multinational markets, climate change, and terrorism are some of the major threats to development and stability. Among these threats are circumstances that are out of human control while others are the direct result of human inequities.  PM Gonsalves and other leaders contend that the fragile state of developing nations should be taken into account when developed countries make decisions that could affect the global economy. The plight of the developing nations is one that “the international community is obliged to address properly in partnership with the people of [the] region (3),” PM Gonsalves stated. This has to be the new order of the day, as developing nations strive to break the chains of adversity. A positive future for their citizens requires a change in the current status quo - a change that would include the concerns and welfare of developing nations.

President Banda stated: “Malawi refuses to accept what others may consider to be our destiny: a state of underdevelopment (2).” The time has come for struggling countries and regions to realize their true potential. Banda goes on to say: “Malawi is committed to change this perception. But in doing this, my government and indeed the People of Malawi know that we need to engage the rest of the global community (2).” Necessary but difficult is the road to improved international relations that would foster a healthy and viable economic climate for all nations. Developing nations cannot afford to fall victim to global ignorance, nor can their plight be swept under rug. Antigua and Barbuda's PM Baldwin Spencer also chimed in, remarking: “it has been…years since we started to see a sharp downturn in the world’s economy. Unfortunately, Antigua and Barbuda is among small and developing states that have yet to see significant improvements. While we have tried several attempts to curtail the hemorrhaging of our fragile economies, it must be said that we need greater cooperation, flexibility and inclusion from our developed partners (4).” With no doubt, improved relationships and cooperation between developing nations and their developed partners would have a tremendous impact on the efforts to rebuild the strained financial system. Developing nations, with their especial concerns, with their challenges and vulnerabilities, need the genuine support of the international community. At the 2011 General Assembly the Prime Minister of Belgium, Elio Di Rupo, pointed out that support was needed in Africa for educational and economic development. Support from developed nations coupled with practical goal building will lead to growth, improved quality of life and a stable future for developing nations.

The leaders of developing nations presented strategies to harness their intrinsic resources in the effort to build their economies and infrastructures to the Assembly. President Banda explained, “my government realizes that the potential of Malawi is great: the potential of our land, our resources and most importantly of our people.” It is imperative to point out the great potential of countries like Malawi that could offer a great deal to the global economy. Despite the challenges faced by developing nations, there are concrete areas that with proper planning can bring sustainable growth to the areas and in effect, benefit the global markets. President Banda outlined her plan in the Malawi Growth and Development Strategy that is focusing on Energy, Tourism, Agriculture, Mining, and Infrastructure Development. She and her cabinet members are dedicated to making the necessary changes that would improve the business climate of the country. Banda stated that “Malawi aims to create wealth by transforming the structure of the economy, promoting the private sector in order to achieve economic growth, accelerate job creation, and protect the vulnerable and the excluded within a decentralized and democratic environment....to transform Malawi to become one of the fastest growing African economies in the next decade.” Internal developments of industry, opportunities, and positive goals for the future are all keys to advancement. And yet, the success of developing countries are dependent upon factors that are intertwined with international and multinational institutions such as International Monetary Fund that use “standard” criteria in decisions that affect assistance and eligibility for relief programs.

These standards have not always led to the best economic environment, as feared by the citizens of Greece and described by vocal leaders such as PM Gonsalves and Spencer. Dr. Gonsalves had this to say: “Central to our urgent reexamination and reconfiguration of the existing economic apparatus is the recognition that our modern context and individual national characteristics do not lend themselves to strict classical or Keynesian economic prescriptions or their variants.” Spencer this: “Gross Domestic Product (GDP) can no longer be the criterion used when accessing concessionary financing and other international financial relief; instead, mechanisms should be put in place that take into consideration a host of other elements including fragility of economies.” Moving away from outdated criteria and irrelevant standards would be beneficial for developing nations, as their economic situations are unique. New, open guidelines must be formulated but as PM Gonsalves states, “our path to development must be our own.” Developing nations have to shape their own destinies, set their own goals, and create their own standards that will lead to most growth, for the greatest amount of people, for the longest term.  It is no longer acceptable that the chains of perpetual poverty and hardship grip the disadvantaged. It is time that the chains are broken. The strategies laid out before the Assembly for cooperation, new policies, and inclusion will serve to raise the consciousness of those in the position to make a difference. A shift in the status quo will take place for the good all nations and people, especially those seeking a more positive way of life. The leaders of developing nations continue to convey their commitment to overcoming their current plight, no longer willing to accept a state of unrest and tribulation. Looking toward the future, their resources, objectives and goals will carry them out of their quandary and into a new day.

Development and opportunities to advance will lead to a better world; one that will offer peace, security, and hope – not just for a few but also for the masses. Leaders of developing nations work with assiduousness to this cause, not only lamenting on their plight and struggles but also offering solutions and urging the international community to support them in these endeavors. A world with fewer victims of poverty, more prosperity, more partnerships, and sustainability is a real possibility if the nations of the world can find common ground and realize the potential of this type of world. This type of world will lead to less war, disease, suffering – it will be a world of prosperity and growth, a world in which future generations can be sure to flourish.

2. Statement by Her Excellency Mrs. Joyce Banda President of the Republic of Malawi
at the General Debate of the 67th [0-Session of the United Nations General Assembly
26th September, 2012 Issued by the Permanent Mission of Malawi to the United Nations